Based on the 2018 survey of the International Pacific Halibut Commission (IPHC), halibut are in decline from Oregon to the Aleutians. Biomass (total weight) is down 10% and numbers of fish are down 24% since the late 1990s. Young year classes show the biggest declines – meaning that the downward trend is likely to continue. 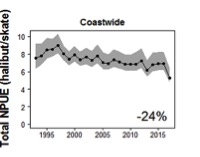 Because halibut migrate across political boundaries they are managed federally and not by the Alaska Department of Fish and Game. The U.S. and Canada share this resource under the Halibut Treaty of 1923. Pursuant to the treaty, the IPHC is tasked with ensuring sustainable harvest of the halibut resource.

Usually, the IPHC decides on the allowable catch for each region at its January meeting. Last year, however, the United States and Canada failed to agree on a joint management strategy to address the downturn. IPHC commissioners agreed that survey results warranted significant reductions in fishing, but could not agree on where cuts should be made. As a result, each country determined its own 2018 harvest reductions. It was the second such stalemate in almost 100 years of cooperative management.

Both the U.S. and Canada made allocation cuts, but neither was sufficient to match the halibut stock decline. In 2018, the U.S. commissioners reduced the allowable catch for the combined commercial and guided-sport fishing fleets in Southeast Alaska (Area 2C) by 15% and the Southcentral (Area 3A) allocation by 5.5%. IPHC fisheries scientists had recommended larger cuts and said to expect further decline at these harvest levels.

U.S. commissioners claimed that the too-small cuts in 2018 were intended to “put the industry on notice,” and ease fishermen into the decline. Substantial cuts were to be expected this year.

In the IPHC meeting that concluded on February 1, the IPHC overcame last year’s disagreements and reached consensus on catch limits and allocations. Unfortunately, they did so at the expense of the halibut resource.

Chris Oliver, IPHC commissioner and NOAA Fisheries administrator, praised the decision as reflecting a “sensible, conservative approach that will secure the future of this iconic and economically important species.”

Sport fishing regulations in Southeast Alaska will be the same as last year. Guided sport fishermen may keep one fish per day of up to 38 inches or greater than 80 inches. Guided sport fishermen in Southcentral Alaska may keep two fish per day; with a maximum size of 28” on the second fish. There is also an annual bag limit of four halibut, and fishery closures on all Wednesdays and five Tuesdays this summer.